Grand Master Dang Huy Duc believes that each family evolves according to the traditions set by its respectable members, and the Tae Kwon-Do philosophy has become the primary underpinning for cultivation of his family’s belief and value system. Grand Master’s 3 children and 3 grandchildren have embraced the wisdom of this martial art and utilized its implications into their lifestyles, worldviews, professional and personal life. Being positioned as a “family requirement,” Tae Kwon-Do has become the main driver that enticed his family members to indomitably pursue their dreams and aspirations, revealing its transformational, life-changing force.

After 5 decades of marriage with Mr. Dang Huy Duc, Mrs. Connie Dang has learned from the powerful Tae Kwon-Do teaching even without practicing the martial art itself. Walking side by side with the Grand Master throughout his lifespan, she has managed to increase her spiritual and moral strength as well. The unexpectedly started when the Vietnamese War forced Mrs. Dang to immigrate with the family to the US and leave her prestigious job as a stewardess for Viet Nam Air. She asserts, “The husband’s belief in the value-adding power of Tae Kwon-Do gave me, and all of us, the strength to strive and survive in a foreign country that has become our new home.” From a Vietnamese immigrant working as a teaching assistant and waitress, Mrs. Dang grew to a general manager at a million-dollar restaurant in Anaheim, CA, but retired from the professional career to take care for the family as a devoted wife, mother and granny.

Acquiring the third-degree black belt has not become a determining factor for Dr. Thieu Huy Dang, the Grand Master’s eldest child, in terms of pursuing a sports career. At the same time, being an integral part of Tae Kwon-Do has encouraged him to devote his professional growth to the traumatic aspect of sports and related spheres. As a result, he has graduated from Los Angeles College of Chiropractic School in 1994 and chose being a Chiropractor in Westminster, CA. Dr. Thieu Huy Dang is a Certified Chiropractic Sports Physician (CCSP), has over 23 years of practical experience in the field of family chiropractic care, sports medicine, auto/work-related injuries, and has worked with many professional athletes. 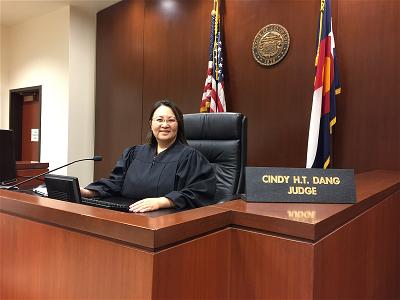 Grand Master’s daughter, Judge Dang, has not devoted her career to Tae Kwon-Do as a professional area, even though she has a first-degree belt. Being part of her father’s philosophy has impacted her life and career choices as well. As a child, she had to move to the US due to the war conflict in Viet Nam. However, the challenge did not break her spirit. On the contrary, her will strengthened by Tae Kwon-Do training and fluency in the English and Vietnamese languages has become a valuable tool in assisting the new immigrants in a variety of issues since her early years. For this reason, she decided to devote her career path to jurisprudence in order to support people from a legal perspective. Thus, in 1994, she graduated from UC Irvine with a BA degree in Political Science, while in 1996, she acquired the Juris Doctorate degree from the California Western School of Law, in San Diego, CA. Prior to becoming a Judge in the 17th Judicial District of Adams County in 2013, she served as a child and family investigator, guardian ad litem, and deputy DA in Colorado Springs being a legal representative to diverse clients handling the immigration, juvenile, domestic and criminal issues. Judge Dang is also involved in numerous legal organizations, including the executive board of the Asian Pacific American Bar Association (APABA) and the board of the CWBA. She is also active in the Access of Justice Committee of the 17th Judicial District, which works to support the Self Help Resource Center and Organizes pro se legal clinics. She credits these organizations with helping her build a large network of friends and colleagues whose support helped her achieve her American Dream.

Kim-Anh Nguyen Dang followed her father’s career path and currently holds a 6th degree black belt. In addition to being an Instructor and one of Duc Dang Martial Arts Academy’s top students, Instructor Kim-Anh Nguyen Dang is a veteran professional tennis player and a proud graduate of the University of California, Irvine.  She graduated with a B.A. in Psychology and Social Behavior in the top three percent of the class, earning herself the Magna Cum Laude Latin honor.  In May 2017, Instructor Kim-Anh graduated from the University of Southern California with a Master of Arts in Teaching (MAT) degree having straight A’s along with becoming part of Phi Kappa Phi honor society. However, she did not stop paving her educational path with the above achievements. In May 2020, she earned a Doctor of Education in Organizational Change and Leadership (Ed.D.) Degree from the University of Southern California (USC).

Instructor Kim-Anh Nguyen Dang has also distinguished herself on the International Tae Kwon-Do competition circuit.  In particular, she returned from the 2013 National Tae Kwon-Do Championships in Memphis, Tennessee as the National Forms Champion (gold medalist), Adult Black Belt National Weapons Champion (gold medalist), and a National Sparring Finalist (silver medalist).  She also competed in the 2013 World Tae Kwon-Do Championships in Coventry, England, coming home as the World Forms Champion (gold medalist).  Reflecting on her 24 years of studying and training, Instructor Kim-Anh notes that while Tae Kwon-Do offers a way to achieve mental and physical strength, these essential traits benefit dedicated students in every area of life no matter what personal or professional paths they may choose. With this belief and sincere devotion, she trains her students, sharing her vision and experience, as well as gives back to the Martial Arts community through continuous engagement in voluntary work and socially valuable activities.

The rich Tae Kwon-Do tradition has also impacted the life of the new generation of the Grand Master’s family. His 16-year-old granddaughter, Katherine Dang currently holds a first-degree black belt, and another 5-year-old granddaughter, Evelyn Dang is only taking the first steps in the field. Although his 1 year-old grandson, Devin Dang is too little to start training, he is a frequent visitor of the Tae Kwon-Do school and often entertains the family with his carefree laughing. Thus, the family tradition is viral and strength-giving for all family members and the story of the Dang’s is to be continued.

OK
We use cookies to help us understand ease of use and relevance of content. This ensures that we can give you the best experience on our website. If you continue, we'll assume that you are happy to receive cookies for this purpose.